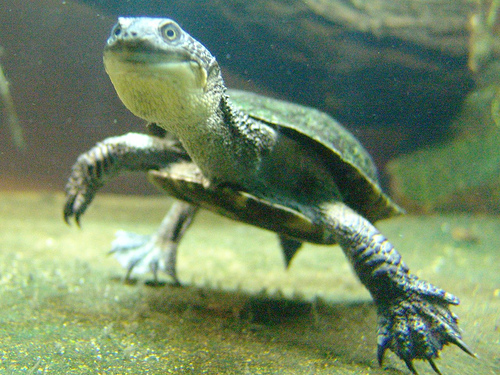 We don’t often see Eastern Long Necked Turtles (Chelodina longicollis), as they spend most of their time in the water.   The Murrumbidgee River is rarely clear enough to see to the bottom where they hang out.  We do sometimes see them hiking overland after rain.  When you pick them up they not only hide as best they can inside their shell, they can give off a thin, stinky liquid that presumably is meant to make you go away and leave them alone.

It works on me.

I’m not sure it works on foxes, who are one of their major predators.

Turtles also sometimes stop and sit in the middle of the road, at threat of being run over.  I discovered one with a split in its shell from a car a few years ago and had little idea what to do about it. I put it away from the road and left it to sink or swim near the riverbank. Now I believe there are some local wildlife rescuers with reptile experience with WIRES who might have a better idea.

My friend Lisa found some pieces of shell (not from that same injured turtle) while she was walking by the river below the house.  She’d suggested I should find her some skeletons to play with when she came to visit, but the only one I saw was a very squashed black snake on the bridge.    Last time she was here, she took home a ram skull with big curling horns that had to be soaked in bleach for several days to make it less stinky for transport.   She has  a collection of mystery skulls (including a rattlesnake) on her shelf and also puts together displays for the a museum classroom loans program.

The turtle shell made a wonderful puzzle. The bottom shell was only two pieces and even had some of the leathery coloured outer layer still intact.  The ribs were surprisingly serrated and ended in spikes that anchor the outer rim plates.

We puzzled over some of the smaller bones, particularly the large number of tiny vertebrae when much of the spinal column is fused into the shell.  Then we remembered that it is a LONG necked turtle – they are all needed for that sidewards folding snake-neck.

Because it doesn’t change much in thickness, it was possible to see the slight changes in shape of the neck bones, but not be able to guess what order they should go in.

I’m not at all sure the neck is connected the right way, but it looks hilarious at its full stretch.

The little skull with its eye holes was not much more disturbing than a living reptile gaze with its dispassionate round eyes.

Lisa mentioned to me that it’s not really legal to pick up native animal bones and play with them.  The assumption is that you might have killed them for their skeletons, or I suppose eaten them.   I hadn’t considered it would be a problem, as there are so many bones all around us. Most get chewed up and scattered quite quickly rather than appearing in neat heaps. Sheep bones are the most common things we see, but are not protected.  Cockatoo feathers, which are protected, are the next most common.  In New South Wales apparently you need a permit for any native animal parts, (the only permit that seems to cover dead turtles),  or you can send off whole bird carcases to the Australian Museum in Sydney for their assessment. You can get permits for taxidermy of native animals, too.

When we lived in Queensland the research permits Craig got for collecting lizards came under the heading “Permit to Interfere with Forest Products” which seemed a rather kinky title on a number of levels.   I once watched a startling number of long-necked turtles being collected and tagged for research from a deep pool in a southern Queensland river.  Some of them were huge, only a little smaller than sea turtles.  I’m sure they found the whole process very much an interference.

In the meantime, the weather became much more favourable for the living relatives of our turtle.

Water trickled everywhere after a 75 mm deluge upstream (that’s three inches for the old fashioned measurements).  The Murrumbidgee came up into “minor flood” ripping up our fences where they meet the river, and covering the low bridge we use to get to town. 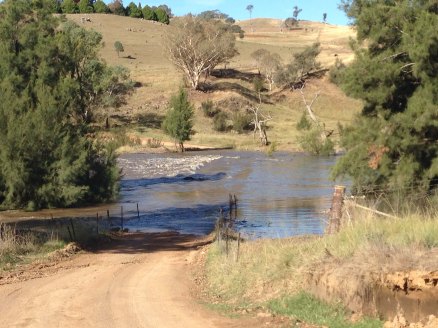 The Mullion Creek didn’t flood, which would have left us entirely isolated, but I had to use a different bridge over the river  to take Craig to the airport for his flight to WA.  On the (long) way back I got an anguished phone call from the CIT students asking about the safety of the wildlife cameras they’d installed. 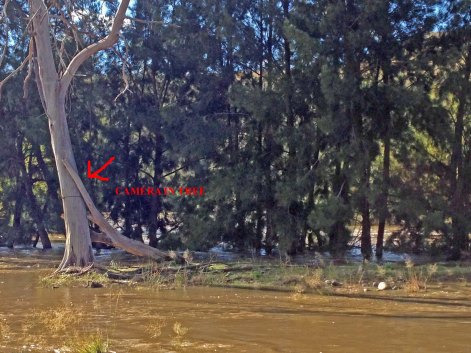 Their wildlife camera by the river was indeed surrounded by water, although it was well out of reach of the flood.  The overflow didn’t look deep so I decided to wade out and have a look just in case. Having been tricked before by surprisingly deep water, I decided to remove quite a bit of clothing before I stepped in.  “Who’s going to see me?” I thought, looking around at the empty road and bare hillsides.  If I’d worn it, my t-shirt would certainly have got wet as the chilly flood came up well over my waist.   It was only as I reached down to move the camera bait station that I remembered that there was a movement activated camera watching.

Anyway…as I splashed away I saw three lambs that had got themselves trapped on an tiny island and encouraged them to jump the rush of water that separated them from dry land.  They’d been following one another around and around on their little refuge in a sheepish panic.  Rescuing them made me feel comparatively less stupid.

Two days later the river was down again, but where the little pile of bones had been was scoured clean.
The living turtles were out of sight as usual.

(top photo of chelodina longicollis by Joachim Muller, from iNaturalist.org)

3 thoughts on “GOOD WEATHER FOR TURTLES”