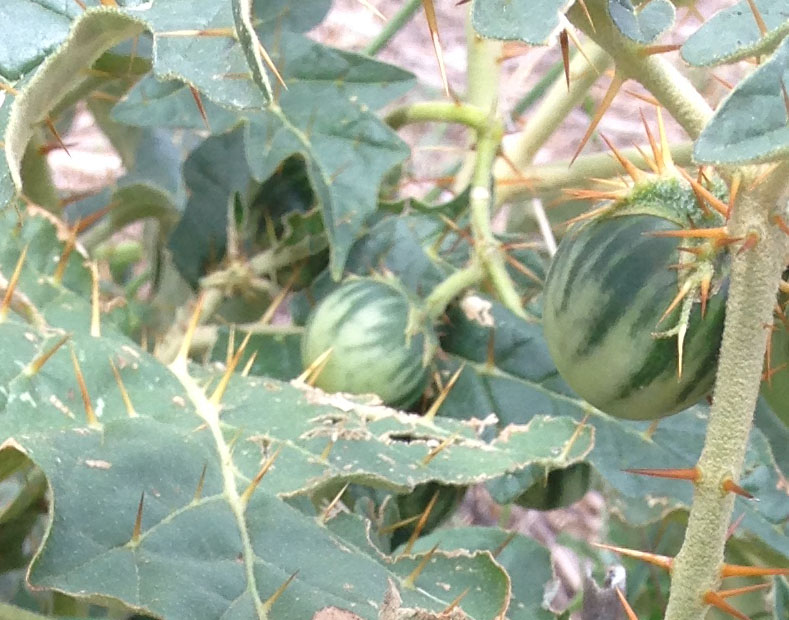 There’s a look that weeds tend to have:  often spiky like a thistle,;definitely fast growing;  pretty flowers perhaps; obviously not delicious to sheep (so still in existence in a paddock);and setting lots of seed for example.

Back in February I was showing Hannah Morgan and Charles which weeds to take out with a mattock from the top of our Box Gum woodland area, but we were mostly finding just a few patches of horehound which needed spraying.  I was particularly looking for Bathurst Burr (xanthium spinosum)which Jessie and I had uprooted as dozens of human-size plants last year.  This year there were none, which was satisfying in one way, but frustrating since I actually had a team of helpers to get rid of it.

Then I found something that rang all my “Weed! Weed! Weed!” bells. I remembered Andrew Leonard pointing it out, but not why.

The pretty purple flowers were a dead giveaway, I thought.

I’d been fooled before by purple flowers on Patterson’s Curse (echium plantagineum), as well as by the prettiness of California poppy (eschscholzia californica), or St John’s Wort (hypericum perforatum). I did a demonstration eradication, pulling up the whole plant, fruit, seeds and all, and stowing it carefully in the back of the truck.

After whacking away at the relatively few other weeds, we headed back to the house for cold drinks and recovery.

At which point I checked my grassland flora.

There it was, spiky leaves, purple flowers, big round seeds and all.  “Local native. Uncommon”. Narrawa Burr (solanum cinereum), a relative of tomatoes and one of the prolific nightshades.

Argh.  I went and got the stem and fruit which look a little like green cherry tomatoes,  and put them aside to plant in the garden.

Looking through my photos, I realized that in February 2015 I saw the same Narrawa burr, and photographed it for consideration next time.  Unfortunately I forgot to look it up.  Next February I’ll stick to my narrow list of weeds, and not take my hoe to something less familiar. 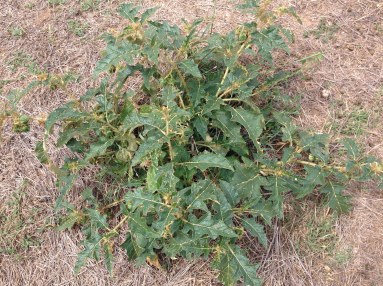