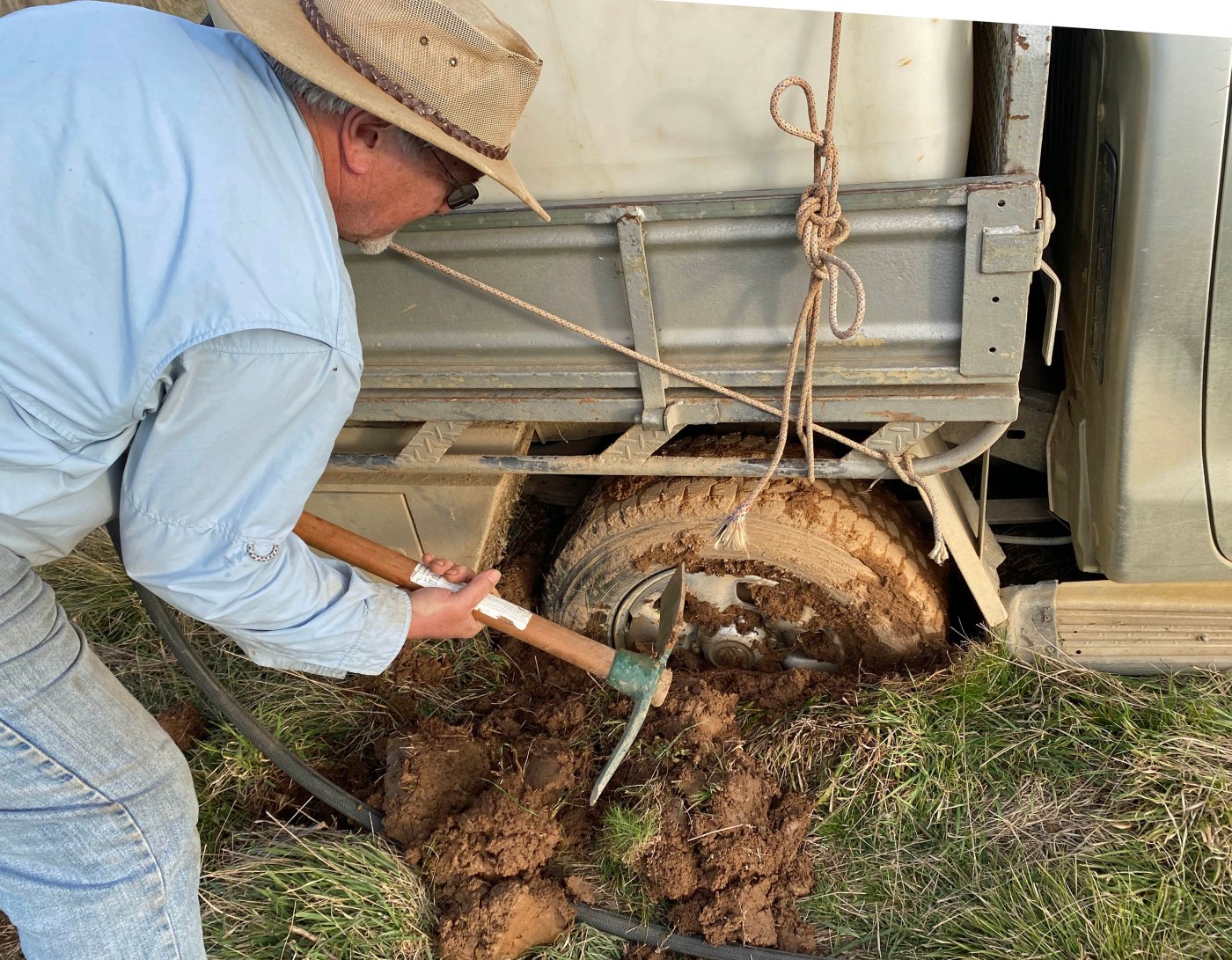 The wheels whir. There’s no forward motion. Damn. Another bogging.

The problem with having machinery is you rely on it. And then it bogs or breaks.

This last year has been a big one for breakdowns, most spectacularly when the wheel fell off the truck on Dog Trap Road. Craig was quite surprised when he saw the wheel running past him into the ditch. Then there was the grinding sound of the brakes and the axle gouging a groove in the gravel road. A rock in a paddock somewhere had snapped off the heads of two wheel nuts, which is plenty to let a wheel eventually wobble its way off.

Luckily Frank lent us his ute to transfer the weed spraying gear from ours to his while we waited for the tow truck. Also, there were apples on some feral trees in the same ditch that I had never noticed driving past, so I collected a bagful while waiting for the tow-truck. They were excellent.

Soon after getting the truck’s wheel and axle fixed, I managed to hook the fire hose on the fence as I was moving the truck along to water trees, so now the hose leaks near the reel and the pump tends to lose prime, requiring a 2 litre bottle of water loaded in each time we start it up.

More minor stuff-ups include me leaving the key in the ignition of the truck, so that it got a flat battery. Not once, not twice, but three times. Our jumper cables had been chewed by rats. We have a really cute little jump start battery pack, but unfortunately it wouldn’t charge a diesel battery that’s completely flat. Or it’s lost its mojo, as batteries do. More recently, when I got bogged in a paddock by the river (why did I go there?) I tucked the key under the floor mat so I couldn’t flatten the battery by leaving it in the ignition. So when friends were there, they couldn’t rescue it for me, because they couldn’t find the key. Of course.

On one of our boggings (Craig’s) our Hilux was pulled out by a vintage Nissan belonging to the heroic Kate. Another Nissan vs Toyota debate.

Meanwhile, the mice and rats were still chewing away on different items – fruit in the bowl on the counter, the power cables to the Annexe, and the heating system. I thought I’d finally won against the mice, except I was hearing intermittent snapping sounds, like mouse traps going off. After hunting around to see if I’d absent-mindedly set more traps than I knew about, the noise turned out to be the sound of bare, chewed live wires meeting dirty dishwater under the sink. So we needed a new drain hose as well as new wiring.

They also gave a good chewing to the centre console of the truck, as if it hadn’t already suffered enough.

Evie, our wonderful battery powered runabout, sputtered to a halt around the same time as the wheel fell off the truck. We hadn’t maintained the original batteries the way they wanted to be maintained (which requires regular contortions to get water into the awkwardly located lids), so they all had to be replaced. Polaris didn’t want to have anything to do with it. They really aren’t interested in supporting their electric vehicles. Luckily a battery dealer was prepared to take it on.

Then the seven year old (new!) house heating system was pronounced “too old to repair”. Since the Yass-based installer had gone out of business, I couldn’t even get the magical disappearing controller display replaced.

Craig says I’m not allowed to mention the septic system, but in less stinky house infrastructure, the roof antenna that transmits a mobile phone signal around the house became unreliable. I gave up on the Telstra landline phone after the fifteenth breakdown in nine years. The breakdowns, according to the repairer were mostly to do with creek crossings, cattle chewing the wires and other such damage as the copper line traveled to us across many paddocks. When we didn’t have the mobile antenna, Telstra would always ask for our mobile number, as if we were only keeping the landline for vintage entertainment, rather than essential communication. And in the end that was true. I was reluctant to give up our old Mullion Exchange phone number, (we were Mullion 27), but I thought we didn’t need it any more.

Of course, our mobile phone call quality became terrible as soon as I cancelled the landline. After four hour-long concerts of hold-music on the Telstra help line, I finally got a technician to call back. We’d caused the problem ourselves by changing the settings on our phone to prioritize 4G reception, when in fact all we have is 3G. Five minute solution.

Meanwhile, having spent the winter huddled around the wood stove while waiting for replacement heater parts to arrive out of locked-down Sydney…we’re hoping summer will be better. The new heater looks like some sort of steam-punk machine and seems to work. In the last week of cold weather we finally can heat the whole house.

The QuikSpray unit is still working beautifully, but I replaced the spray backpack that leaked dye all over me.

Just so that we can be sure to have something new to bash up or have break down, Craig got a slasher for his birthday. Last year’s birthday, that is. It arrived in April – this year – as an impressive parcel and got put together into a workable machine. So far it has taken the seed heads off the barley grass in the two house paddocks twice. The seeds are undesirable as they get stuck in sheep’s wool and eyes and are pretty annoying, so it was good to see them go.

And to see something working as it should.