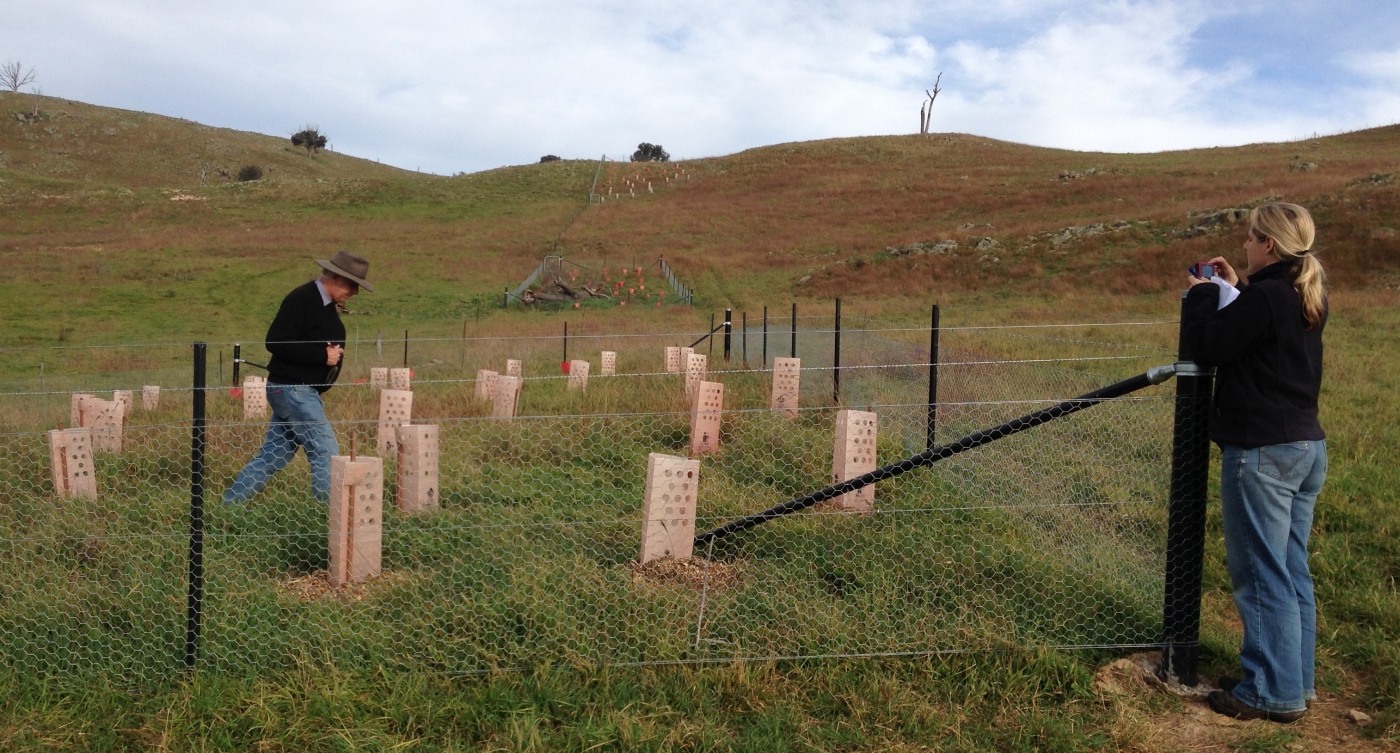 Last autumn we planted up five mini enclosures to provide protection for small native birds and to re-establish a corridor from the Mullion Creek down to the Murrumbidgee River.  It turned out to be a great way to get a lot of connection done without a massive amount of time spent planting.

At the time I was glad to see a lot of native speargrasses and scattered clumps of native bluebells (wahlenbergias) among the introduced grasses and weeds.

The numbers in brackets show how many of the enclosures include that species.

I’m really happy to have this list as I sometimes lose track of what I planted, and it’s a long hike uphill to check.  In the heat of the moment I also sometimes make some odd choices.  Putting river bottlebrushes on the top of a ridge, for example. 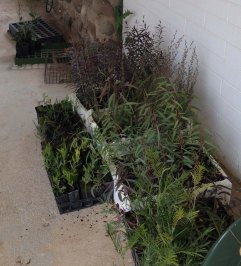 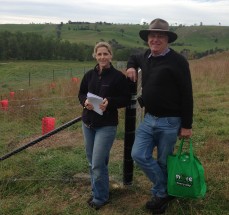 After we were done planting, Rainer Rehwinkel and Lesley Peden from the Kosciuszko to Coast Foundation came out and paced back and forward in each little area recording all the plants they saw.  It was early in the season, so many of them were very tiny.

I looked up and made links on the names for many of the plants that interested me or I didn’t know well.  I chose sites that had good information if I could, including the Atlas of Living Australia.  There wasn’t one site that covered everything well. Some were fascinating, such as EattheWeeds.com

WHAT RAINER AND LESLEY ALSO FOUND – EXOTIC GRASSES AND FORBS

There were plenty of all of these mainly unwanted things.

The brackets show how many areas had them.

I have detailed information on which area and how common the plants were in the spreadsheet Lesley Peden from K2C gave me.

When I looked up the (unknown to me) Purple-top Verbena online, the results that came back first were how to order it to plant in your garden.  Retailers are certainly not helping control the weeds we see around.  Mind you, I feel sorry for an industry that has to live with the whims of both fashion and the weather.  Grim.

Buchan weed was another I’d never heard of.  It turns out to be a brassica, a mustard relative.

I disagree with Rainer about solanum nigrum being “deadly nightshade” as many years ago I took Tim Low’s advice in his book “Bush Tucker” about eating certain weeds.  The “blackberry nightshade” (alternate name) berries aren’t bad baked with fetta cheese in a pie.  Atropa belladonna (the real deadly nightshade) doesn’t grow in Australia.

The other weed that turned out to be edible was the stork’s bill – apparently pretty good and has a multitude of uses including as a cure for rheumatism.  Which I haven’t got, but if I get it it, I only have to hike around the hills collecting the leaves to put in the bath.  Sounds like a plan.

Hearteningly, there were also NATIVE GRASSES AND FORBS.

I was surprised initially to see “grass-tree” listed in three of the enclosures.  I had no idea they grew around here.  I’m more familiar with them from when we lived in Queensland. Xanthorrhoeas do grow around Canberra despite the cold and frosty winters.   Some were moved from the enlarged Cotter dam area to the new Arboretum in 2010.  They’re very slow growing, so I assumed they must be quite small and not very noticeable.  But when I double-checked the name “xanthium” thinking it must be a different group of “xanthorrhoea” I discovered that it was a misprint and I’d had all that excitement for nothing.

“Xanthium”, sadly, is the noxious exotic weed known here as “Bathurst Burr”, in the US as “cockleburr”.  A nasty prickly thing that’s been coming up everywhere since the last drought.

More happily,  having had the native rock fern pointed out by Rainer,  I saw it all over the place. Basically, anything with “rock” in the name is bound to do well here.

The name “Hairy Panic Grass ” is very graphic.  It brings to mind a horse getting electrocuted and going berserk.  It grows quickly and can be good pasture until it flowers, according to the NSW DPI.  I’m hoping our “panicum effusum” is a different species to the “panicum capillare” also known as “witch grass” that poisoned a paddock full of weaners near Horsham in 2010.

5 thoughts on “WHICH? WHAT? HOW MANY? THE PLANT LIST”