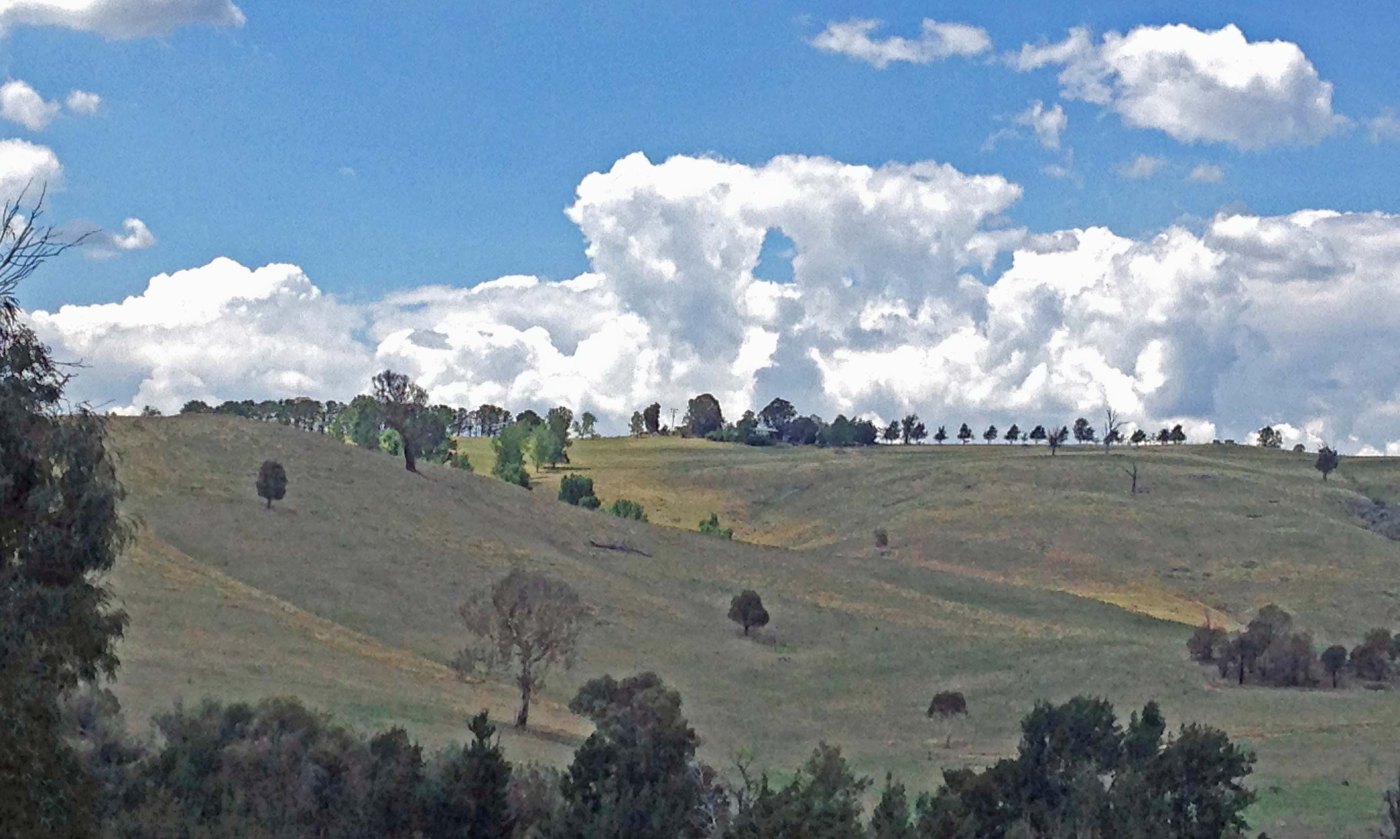 From our verandah lookout at the bottom of the river valley, it often seems that summer storms pass us by on either side.  Whenever the weather report says “showers” I assume that means “rain for other people”.

We look up at the ridgeline of Adnamira and see the clouds tumbling past on their way to Canberra.

When there’s rumbling and groaning from the sky, I hope it doesn’t mean fires started by lightning strikes.    With almost daily thunderstorms, there have been dozens of small fires and a few big ones.  Luckily we’ve had no storms that are completely dry around here… lately.

I was chatting to Kingsley Southwell from the Wallaroo Road area (the other side of the river).  He’s convinced the storms happen more often on our side, from all the times he and his crew have been called out to fight lightning-strike fires on the hills of the Mullion and the Wombat Range.

As I flew back from Melbourne I saw someone south of Canberra getting bucketloads of rain.   Not us.

The summer storms remind me of living in Queensland, where most summer afternoons would bring a deluge.  Some of them could create standing waves a metre and a half high beside the road as the water poured off the Brisbane hills.  That pattern of summer rain and dry sunny winters may move south towards us as the climate warms, bringing more insects, mold and lightning strikes.  Oh yay.

On the other hand, parts of tropical northern Australia have been missing out lately.  Perhaps we are getting their summer rain.  Sixty-five percent of the state of Queensland is in drought right now, with some people having seen no rain at all for years.  It’s desperate times for people making a living there, and their faces have that “Grapes of Wrath” look.  Californians also are complaining about drought, which usually means Australia gets more overall as part of the El Nino/La Nina cycle.

We’re not in drought, but it’s not a wet year around here either.  Just falling in shorter bursts.  One day we recorded 19mms of rain, our closest neighbours towards the hills 39mms, across the river on Kaveney’s Road 72mms.   All in an hour.  Canberra’s rainfall in 2014 was 586mm, down from the average of 614mm.  We generally get a little less than that here.   If I could get my rain gauge working properly, I’d have my own records.

Somehow or other, though, we mostly get our fair share.  Usually when we’re not watching.

Arriving back from the airport on Monday, we met a Rural Fire Service crew watching out for stray plumes of smoke after a thunderstorm caused a fire very close to Esdale. Luckily the strike and the first curl of smoke were spotted and dealt with promptly.  Before we even knew about it.

Otherwise we might not have been admiring the beautiful post-storm sunset so calmly.

5 thoughts on “WHO GETS THE RAIN?”