This year we had the wonderful team from Justin Borevitz’s lab at ANU, along with another hundred yellow box  (eucalyptus melliodora) that they raised from seed, genotyped and either pampered or subjected to all sorts of tests (drought str 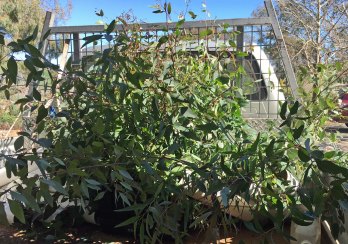 ess, various sprays etc).  In the last two years we have planted 30 to 50 of these which despite some setbacks in the way of frost, not to mention last autumn’s endless dryness, have been doing well.   The main challenge is transporting the big pots (this year big sections of pipe) up to where they’ll be planted. The rest of our plants come from Murrumbateman Landcare, Greening Australia or Damian DiMarco’s nursery on Wallaroo Road, making as wide and balanced a range of species as we can manage.

In the past few weeks we’ve been planting sections of this year’s big project – a new windbreak on Esdale.  Last weekend the army of pink covers finally peered over the hill where we can see them from the house. 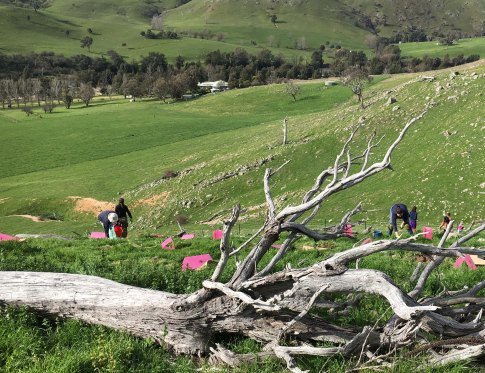 My priority in planting has been to plant the ridges first because that will benefit the water runoff the most, and it is where there has been the most loss of old remnant trees and the least planting in the last century.  I’m not really a fan of straight lines that slice across the landscape, but sometimes we have to make use of existing fence lines that sort of run where we want them to.

It was great having real botanists helping us with the planting. I’m generally paranoid about touching the fragile root systems, but the purpose of the big pipes filled with sand was to shake the sand off and examine them closely.   Justin demonstrated for the children (and me) how eucalyptus melliodora transports water through its roots.  The ones loaded with water are visible here looking like thick worms.  Not to be confused with actual worms. 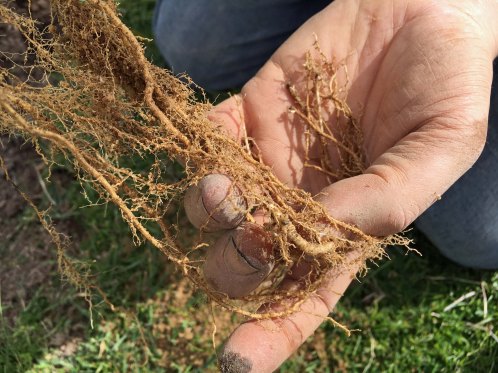 As we planted, there were requests for “more blankets” (mulch mats) “pixie dust” (mycorrhizae)  or “pink hats” (plant guards).  The pink hats also doubled as kites when the breeze got up at lunchtime.

Two years ago I had Trent lay out hundreds of pink covers ready for planting, but they blew all over the hillsides, up to a kilometre away.  Escapees still turn up pinned under a briar bush or jammed between rocks.  Folding them up and inserting the stakes weighs them down a little, but makes them more awkward to carry in big numbers.

We puzzled over how to mark the melliodora.  Previously Tricia used metal tags (2014), and Justin photographed them from a drone (2015).  This year we marked the codes on some of the pink covers, but I decided to come back with labels later when we collected the pipes for use next year.   But since we had marker pens, we ended up with some stylish decorated covers as well. 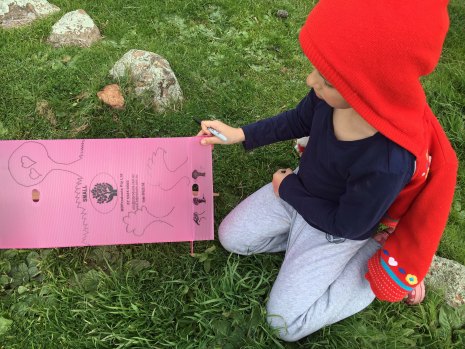 Thank you to all who came – 200 trees well planted!