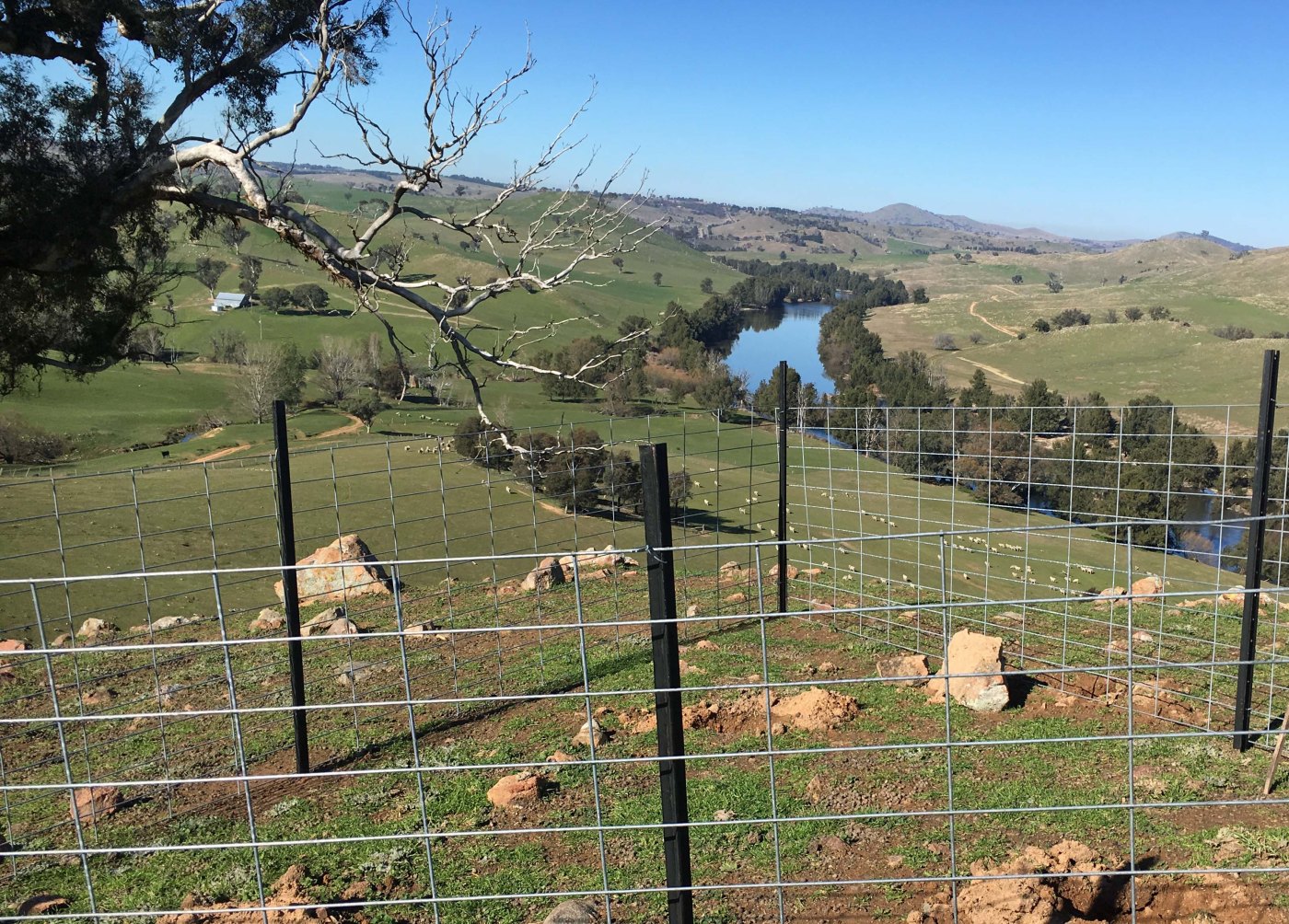 I’ve started adding some tiny triangles to my collection of revegetation plots over our hills. 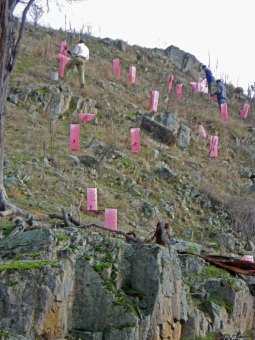 My plans for tree-planting have been evolving over the past four years since we moved back to live at the family farm.  I started knowing we needed to do something substantial, because the small amounts of revegetation we’d been doing over the last forty-five years were only letting the land go backwards.

So we had to increase the number of trees and shrubs, and the area planted.  That included doing some areas (mostly steep and rocky) of around ten hectares.   Added to that is the need for several big windbreaks as shelter for grazing animals.  Those are still to come.

In 2014 I learned about wildlife stepping stones through Lesley Peden and Rainer Rehwinkel at the Kosciuszko to Coast Foundation, including the research that shows that small birds will travel up to a hundred metres, but definitely not further.  It’s the small birds that protect the big old trees, thus we want birds for the trees as well as for their own beautiful sakes. 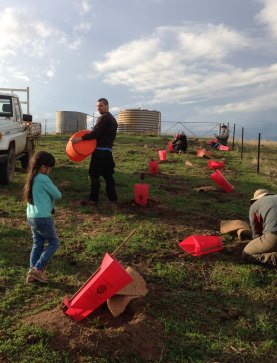 So as well as the big areas of plantings, we began to make small 20 x 20 metre “connectivity” plots, stringing a network of them across the paddocks to link up trees that have lost their neighbours, the river corridor, and substantial areas of bushland to the northeast and southwest.  With three lots of plots in 2014 and 2015, we have been able to connect several kilometres together across previously inaccessible territory for small woodland birds.

Small connections are particularly valuable in places where I never intend to plant windbreaks, such as in the centre of larger paddocks.  It also seems to me that the smaller plantations are much more defensible against fire than long windbreaks without gates.  For example,  Frank has described fighting a fire at Jugiong where they simply couldn’t get around a fenced windbreak, and meanwhile the fire got well away from them.  He points accusingly at some of the plantings along Jeir Creek as places where they used to be able to stop a bushfire, and now won’t be able to.  Mind you, he seems to say that about all trees.  Anyway,  I’ve planned windbreaks (where I can) to cut across and hopefully slow the prevailing winds, while the small links keep the whole thing connected. 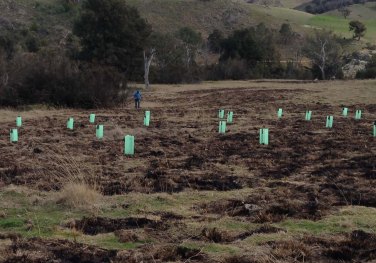 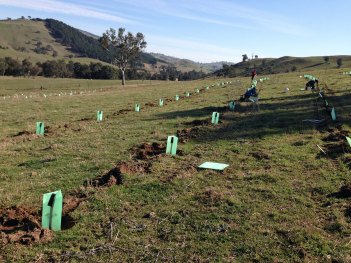 Since that’s plenty for now, I’d intended to save doing individual paddock trees for when all our big areas were established, to widen their effectiveness into the purely grassy areas. I know that for trees to survive well they need to have some sort of ecosystem around them, particularly shrubs, and that works best in a larger enclosure.

Nevertheless, I’d been thinking for a while of experimenting with some really tiny enclosures, just three plants in each, using stiff mesh and star pickets.   That should be just enough to give some support for the new trees, and cover for the birds while they grow.

One of the advantages of the idea was that while the materials are more expensive than for a long strained-wire fence, it takes no particular skill to build them.  A roll of tie-wire and some pliers, and away you go.

Anyway, my hope was that these little trios of trees would survive and thrive, where most of the individual native trees Dad planted in the 1960s and 70s were a miserable failure. 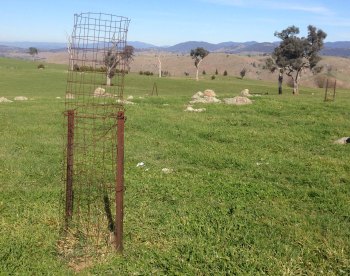 Through the generosity of the Foundation for National Parks and Wildlife  and Land for Wildlife we can now try out this system  by doing ten of them. 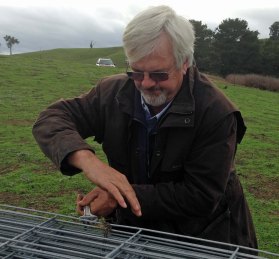 It wasn’t quite as easy as I’d hoped.  There’s a reason that most people don’t try to carry around 6 metre lengths of steel mesh.  It’s very awkward.   Individually, they’re not that heavy, but once you have more than one to carry, they have quite a bit of weight.  Also they slip and pin your fingers, bend and catch on the ground and generally misbehave.

I bought thirty pieces of mesh for this project.  Having ordered them from MA Steel in Yass, I happily turned up with my new 3 metre trailer at their yard. They looked at it doubtfully.  “If it’s just a couple of pieces, you can teardrop them, tie them up, and they’ll fit.  But you can’t do that with this many.” 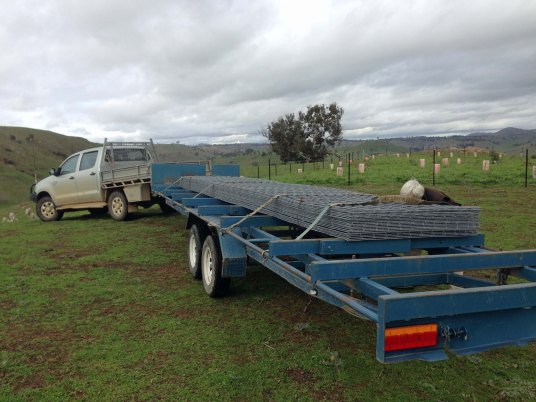 They offered me the use of their 8 metre trailer instead and I took it.  As I lumbered my way into the paddock, I learned a few things about very long trailers.  Such as, wow, that stopping distance is long, and hmm, you need to allow a bigger turning circle if you don’t want to hit a gatepost, for example.  The paddocks were wet and slippery, but thankfully there was no nonsense with sliding sideways down the hill and going upside down in a gully.   I did think that might be a possibility.  I called Craig and he opened gates for me so I could go smoothly through (apart from clipping the gatepost) and slither to a stop right where I wanted to be.   I even had enough room to make a big turn and slither right out again after unloading. 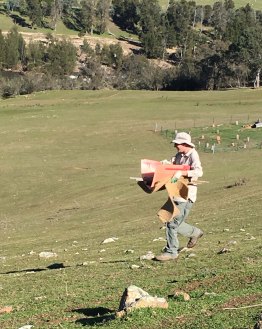 The following week we had help from my lovely new tree planting assistant, Matthew Kent,  and Dr Sonal Singhal who took time off from the University of Michigan to smack in star pickets with enthusiasm and determination.  It turns out that when you make a triangle on a steep slope, the pickets have to be vertical, but the mesh has to be perpendicular to the ground, and the result is a lot more bits sticking out than any professional fencer would allow.  Never mind.

This year’s grant covers ten triangles.  Each one has three pieces of mesh, six star pickets because the centre of the 6m pieces of mesh were a bit wobbly, and most importantly, one tree and two shrubs.   I placed them around a ridgetop planting from last year, spaced them at around thirty to forty  metres apart, and made sure that each of the big remnant trees on the hill got at least two nearby.  Ten enclosures don’t go very far on a big hillside, but they’ll more than double the number of solo paddock trees on that slope.  They were also slower to plant than a bigger enclosure, because of all the picking up and moving from place to place. 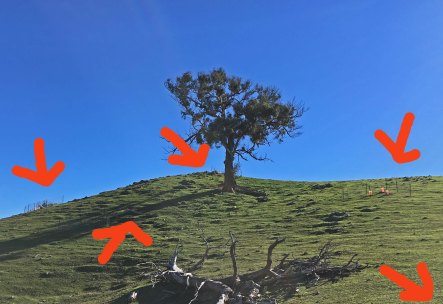 The grant includes two more years of ten enclosures, so that’ll be a good start on my big deficit in paddock trees.  It will increase the area supported by my regular connectivity plots hugely.  After the three years, if it works well, I plan to start some similar paddock tree clumps on the other side of the river.  After five years I hope to be able to pull up the original star pickets and move my pieces of mesh to new locations nearby (no trailer needed), thus continuing the process as many times as I can. 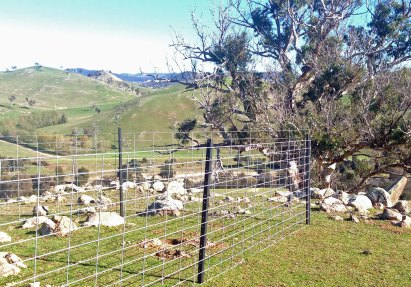 So now, I have three levels to work on – big, middle-sized and little.  Unlike Goldilocks, all sizes are right for me.  I just have to wait for my fingers to recover from being squashed between pieces of mesh.

10 thoughts on “GOING TINY – WITH TREES”