One of the things I love about gardening is the unexpected arrivals.  After being away for three weeks we had a predictable explosion of spring weeds – sticky weed, nettles and grasses especially.   Many of them arrived with the sheep manure dug up from under the woolshed a few months ago.

Also expected were the running-wildly-to-flower brassicas – broccoli, kale, and bok choy plants, as well as lettuces and leeks for a bit of variation (and wasteful non-eating). 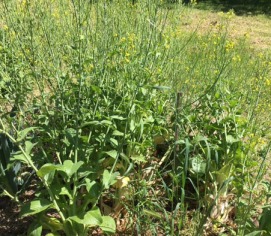 More delightful were the strawberries (by the bowl), the remaining broccoli heads and the asparagus in big fat stalks.  My theory was I should keep planting a few new asparagus roots each year until I began to have too much to eat in a season.   I think I’ve finally reached that point.

Also doing well are the snow peas.  All of them have been pushed along (like the weeds) by the big doses of sheep manure, so it was definitely worth the trouble.  This year some of them were flowering pink, as were some surprise poppies.  They matched nicely with Mum’s camellia.

Even the dwarf peach tree was hiding surprise peaches, despite the attack of curly-leaf disease which I was too sick to treat at the right time.

A further surprise among the overgrown parsley though, I have no idea where that came from…hmmm 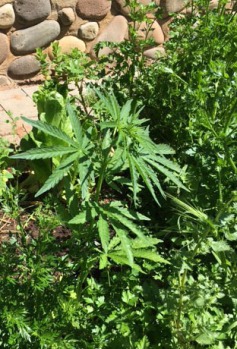 Best surprise of all – having our friend Robyn Evans visit from Brisbane and weed the grass from among our irises, our sudden group of yellow irises among the usual blue ones.