One way to stop topsoil from disappearing from under our feet is to use loose vegetation. Anything from grass and weeds to big logs will help catch it as it flows past.

The Southern ACT Catchment Group ran a workshop recently with Cam Wilson from Earth Integral as the expert advisor on how to make the best use of sticks and stones on small areas of erosion before they become large ones.

“Start small” Cam advised. “If the erosion hole is deeper than your knees, it’s probably too big for a beginner”.

That ruled out many of the places on Adnamira I’d been thinking of tackling with these techniques.

He taught us how to assess the amount of runoff that would collect in a particular area.  40mls of rain in a catchment of 10 hectares will produce massive amounts of water.  A smaller catchment area, much less flow.  What looks like a tiny crease in a valley could turn into a raging flood in wet weather, carrying away a structure that’s too flimsy, or on too steep a slope.

“You can’t stop the water” he pointed out “It’s going to go over, or through, but you can channel it where it will do the least damage”.

He taught us how to recognize whether the erosion was happening at the surface, or whether the soil was being eaten out from below by undergound streams.  Sodic soils that dissolve when they’re wet are particularly prone to this, and we have some big areas of them.

The main way to protect the topsoil is to keep a good covering of grass, which does a great job of holding it together. Trees and shrubs will work too, but take longer to establish.  Rain that falls on bare ground will dissolve the topsoil and carry it away as dirty brown water.

In the short term, while you’re waiting to get trees established, you can reduce erosion by building a flow channel out of brush or stones.  The brush will break down over three or four years, and need a bit of checking on once a year.   But if there’s no budget for major earthworks or building with stone walls, it’s a great deal better than nothing.

Cam taught us three different methods of erosion control, all in one small gully.

The first was making a mostly brush barrier in the centre of a gully, to slow the flow and catch the sediment as it passes by.

That one was fairly straightforward, except that it has to be pegged down thoroughly with pegs or short star pickets and tie wire, and a frame built with logs. 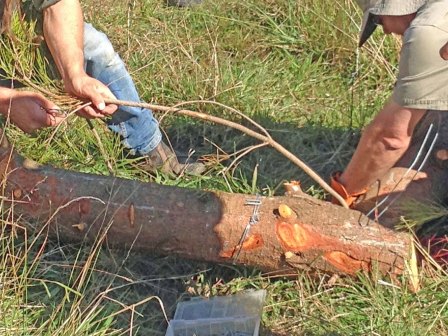 Just flinging brush around won’t do for anything except, perhaps, an animal path where you can encourage them to divert to a less damaging route.  In a proper construction the (preferably nice, fresh, soft) brush is tied down onto the frame and stamped about.  It’s really important to build it up over the edges of the gully so that the water can’t go around.

The shape is a V, with the point facing upstream to break the flow where it’s fastest and direct it all along the structure with less force.  This one seemed like something I could do on my own if I had to, although threading the wires underneath involved a lot of cursing and everyone ended up covered in pine sap.

The second was a log ramp.  That required a bit of digging to shape a deepish hole to accept the square ends of the logs.  As the hole was already filled with water, the group building that did get muddy feet.  The logs are shoved in hard against the dirt wall and wired down so they don’t just float off the first time some water comes through. 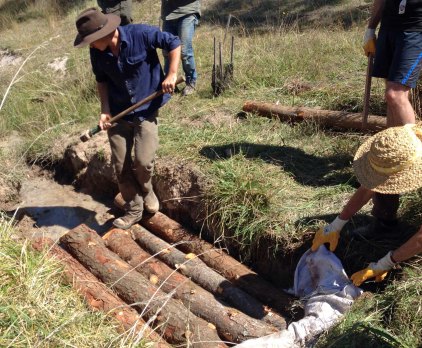 As layers are built up, they make a set of steps for the water to flow down gently. 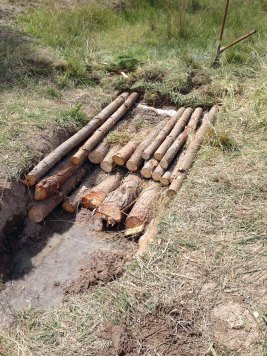 Over the top it’s good if you can re-use the topsoil and grass to help it get established among the logs and make a more permanent result.

The third was a support for an undercut drop.  That was really the most tricky in my opinion.

There wasn’t a lot of digging, but there was a lot of driving pegs into the wall of the overhang to support the building of another log frame and then lots of wired together bundles of brush.

For that one it was really important to get the brush hard up against the eroding edge so that the water doesn’t just run down the gap before it gets there.   Once again, the idea is to make an easier slope for the water to trickle down without landing hard anywhere along the way. 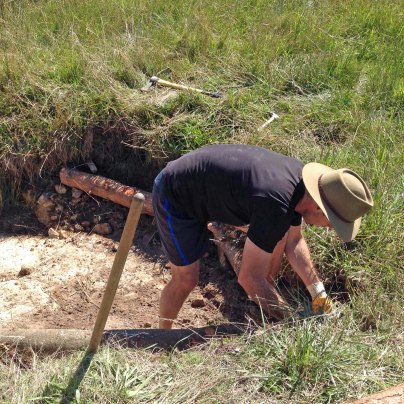 Cam treated the precious clumps of grass with great care, as they work well to lock everything together, and provide that smooth ramp.

The following weekend I went with Murrumbateman Landcare to Sue McIntyre’s place at Gang Gang where she had had some frustration trying to shore up an undercut like that last one, ending up with a clump of young casuarinas growing out of her brush, and the erosion continuing behind it.  Right beside it was another branch of the same small gully that had simply been dug and levelled into a smooth ramp, looking beautifully effective.

I can see that there’s a huge amount to learn about what to do with erosion.   Cam was constantly reminding us to look up at the slope of the ground, then get right down and check out the texture of the ground and the soil type, and make our judgements based on all that.   It’ll take me years.   Craig and I did a lot of walking about on Adnamira looking for the right places we could potentially tackle.

The new Landcare at Wallaroo is having Cam come for another workshop on 31st August (a Monday evening) with the practical on the 19th September.

Maybe if I do that I’ll feel confident enough to make use of the massive piles of branches left by Origin Energy when they chainsawed their way along the power lines a couple of months ago.   We’ll see.

4 thoughts on “WASHING AWAY PART TWO – STICKS AND STONES”