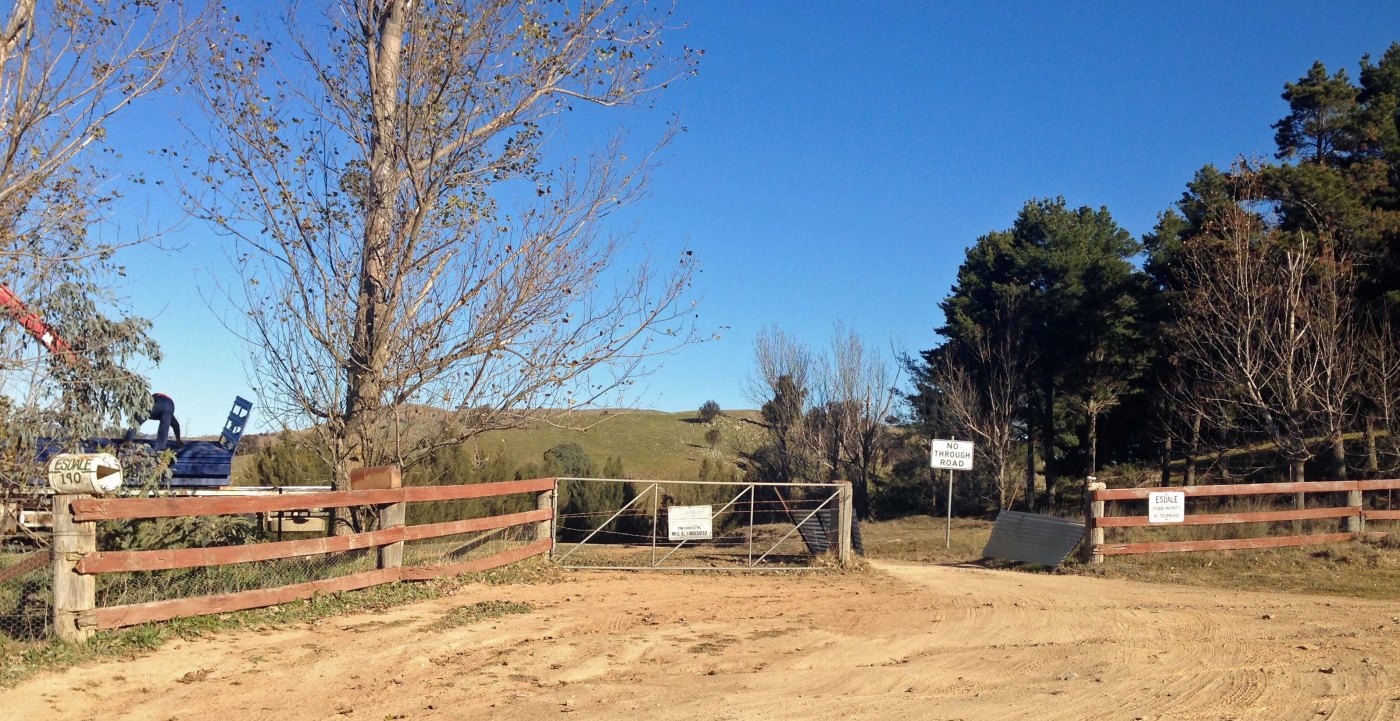 A cattle ramp is the first thing you see when you enter most farms.  They’re easy to drive over, when they’re not buckled and bent by huge trucks, but they’re not always great at keeping sheep and cattle from crossing.

The old entry ramp at Esdale was particularly bad.  It was strong.  No truck could bend it, because it was made of concrete with square spaces that were supposed to be empty and frightening to a sheep.

Unfortunately, the spaces were usually filled up with gravel that washed in from the Cavan Road.  That gravel would soon grow grass, sometimes making a thicket half a metre high.

The sheep scampered across and up the road, laughing all the way.

Andrew tried the trick of tying plastic bags to the sheets of tin that formed the edges of the ramp.  That worked a little better.

When I was a kid, farmers used sheep ramps rather than cattle ramps.  They had little narrow metal slats with gaps between that merinos were supposed to find scary and slippery for their hooves.  Cattle ramps were bigger, with round slippery bars and much bigger gaps for their hooves, and they were further to cross.

The little sheep ramps have completely vanished now, as far as I know.

They certainly wouldn’t hold a modern cross-bred sheep, with their bigger bodies and tendency to jump about like goats. 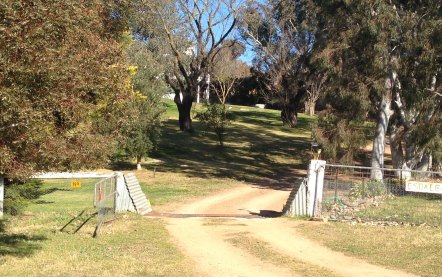 The house ramp also needed replacing because of buckling, and again because it kept filling up with gravel every time there was heavy rain.

But  any ramp that’s going to keep stock in (or out) reliably needs to be 2.4 metres wide (across, rather than side to side).  It also needs to be strong enough to support a truck when the drivers are too lazy to get out and open the gate at the side.

The widest ramp I could find was 2.1 metres and rather expensive, although very good quality.

Then I found that M A Steel in Yass made a terrific heavy duty ramp for a good price.  But it was only 2 metres across.  Not wide enough.

I decided that the price was so much better that we could try having two of them side by side.

Even the feistiest cross-bred wether would think twice before jumping 4 whole metres.

The replacement process took lots of heavy equipment, trucks, bobcats, gravel, welding and even a crane.

We’d decided to put the new ramps on top of the old so we didn’t have to take the old one out, and because it reduced the problem of gravel washing down from the road into the grid.

Watching James O’Keefe the master Bobcat driver in action is a pleasure all by itself.  A little like an attack of the Daleks, though.  It’s spooky to see something that should be lumbering about going so fast, and placing things so accurately.

The new gate slotted in perfectly.  Andrew offered to be in charge of repainting the lettering whenever it needs it.

Having the nice shiny new ramp, meant the old fence also needed replacing.  Despite its rather rustic charm, it was torn down for a new shiny metal “W-strap” fence that won’t rot and collapse in a breeze.    I may have to repaint our old kerosene tin letterbox to match, though.

A wayward sheep transport truck bent up the side rails the very day after it was installed, but Dale and Andrew had it fixed and repainted pretty quickly, at the truck company’s expense.  Big trucks are supposed to used the side gate rather than the ramp, but they’re often too lazy or in too much of a hurry to do so, hence the battered appearance of old ramps.

At the house, the driveway has a whole new swoop, with the gravel ramp up to the grid.

Once again, James was a wonder with the bobcat.

but our lovely neighbour Leonie has seen enough heavy equipment and preferred to climb our tree to remove the dangling bark.  She was happy to get a ride down in the bucket of the machine, though.