A big attraction of setting up the “small bird stepping stone” plantations on Esdale this year (five 20m x 20m areas that link the Mullion Creek vegetation to the Murrumbidgee) was the promised monitoring of the plants and animals.  I’m really interested to see what the changes will be as the trees and shrubs grow.

It’s great to have an outsider do the official counts because I’m a lousy birdwatcher.  I let myself be discouraged at an early age because I was short-sighted and found it hard to pick out a swan at twenty paces.  Craig is better, especially with raptors and parrots, but we’re both unreliable with calls and identifying the little brown birds that all look so alike to the ignorant.

Somehow, they can tell themselves apart.

Anyway, the lovely Lesley Peden from the Kosciuszko to Coast Foundation brought Damon Oliver from the Office of Environment and Heritage to make an official bird count for each enclosure.

They had to fight their way through the long grass to get to them.   Then at each one Damon set his stopwatch and started listening and looking around.

Unsurprisingly, the top of the ridge near the existing stringybark, bursaria and yellow box groves had the highest number of birds.  The number of species decreased rapidly as we went down the hill through the naked treeless paddocks, and just began to pick up again at the bottom where there are some large remnant trees.  I plan to add some more areas next year to the edges of the lucerne paddock.  They will strengthen the connection with the river, and should help build the numbers of birds there as well as helping protect more of the remaining old eucalypts.

While Damon did his counting in the top area, there was a drama going on in a big recently dead tree nearby.

A dusky woodswallow was determinedly attacking a large brown falcon that was just as stubbornly sticking around.

The tiny woodswallow presumably had a nest of twigs somewhere in the dead tree and was trying to keep the falcon away. 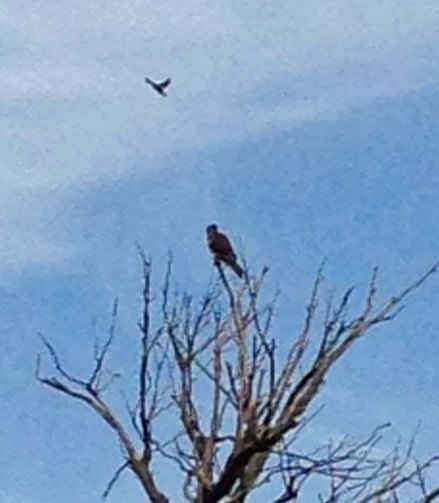 The woodswallow  finally managed to irritate the falcon enough that it flew off.

But it only circled for a while, then came back to the other side of the tree.

As Damon worked his way down the hill for ten minutes at each enclosure, the battle went on.

Other than the brown falcon (falco berigora) the only uncommon or vulnerable birds he found were the diamond firetail finch (stagonopleura guttata) and the white winged triller (lalage tricolor or suerii?)

The diamond firetail is a beautiful small bird, and one of the targets for the Kosciuszko to Coast rescue program (picture here).  It likes open grassy woodland, but when there is too little cover, the currawongs and other predator birds eat them.  That’s why we’re planting trees.

The white-winged triller is interesting because they make communal nests, sometimes in a large colony (picture here).  They eat mostly insects, both flying and on the ground.  Excellent.  We want them to eat more bugs like the ones I’m swatting away at the moment.

I was horrified to realise that the birds that I’d seen flocking around like starlings are in fact the introduced European starlings that seem now to have escaped from the cities and made for the bush.  I’d been using my special wilful blindness technique to avoid seeing them.

Anyway, here’s Damon’s list of 48 birds.  It’ll be interesting to see what’s here the next time.