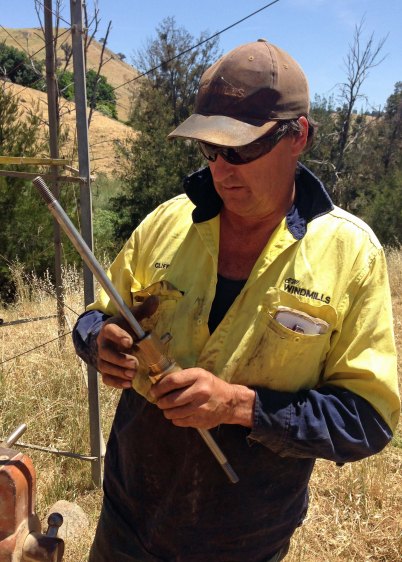 For the last couple of years the old windmill by Mullion Creek has been sitting idle, creaking a little when the wind blows.

A plumber told me that windmill repair is a great job to be in – because they always need fixing.  They have moving parts from the blades to the pump “buckets” that bring up the water.  Moving parts wear out.

But when they’re working they are magnificently simple and sturdy…and require no fuel.  Wind we have in plenty.

There’s only one person locally with the skills to repair broken windmills, and he’s constantly busy.  Our neighbour Andrew complained that the last time the windmill had a major overhaul, it only worked for a month and then broke down again, leaving a suspicious scattering of loose bolts on the ground.  Cliff the repairer humphed at the suggestion it was his fault as we went hunting for the parts in the long grass. 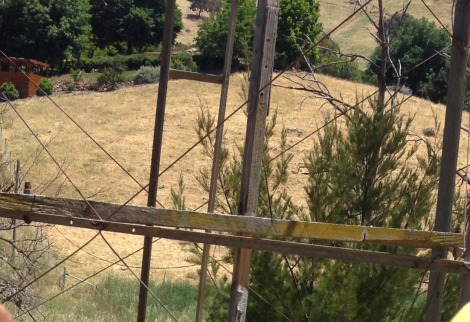 I was surprised to see that the main vertical shaft was made of wood, ancient, gray and flimsy looking.  “Better than steel” said Cliff “You want it to break and be easy to fix, and leave the steel pieces unbroken”. Maybe it wasn’t so primitive, then. 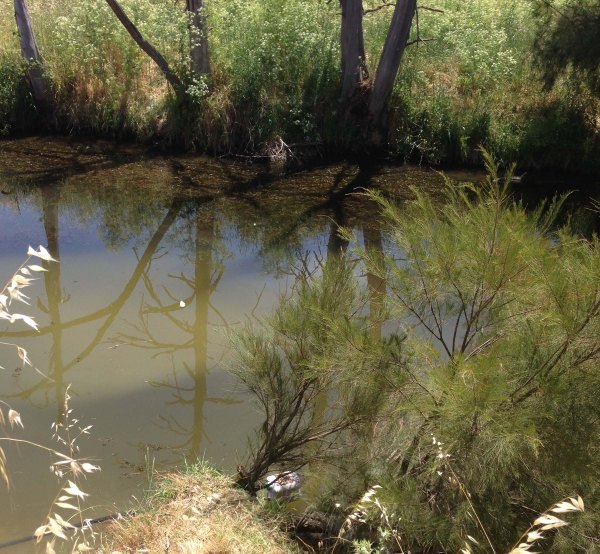 I was sent down to the creek to check the foot valve, which holds water in the pipe as it’s pumped up.  The problem is if the end of the pipe gets above water, it sucks air.  If it goes too deep it sucks mud.  I climbed out on the flimsy trunk of a casuarina tree that bent right over the water and reached through the branches to catch the rotten plastic rope that held the end piece.

The dogs immediately threw themselves into the water, stirring up the bottom and generally adding confusion by getting their leashes tied around branches.  I wasn’t prepared to let them go, as they usually disappear down wombat holes for days at a time.  So I spent half my time untying them from awkward positions, expecting at any moment to go head first down the slippery bank into the water.

I made a new float for the head, one that should keep it submerged but also from dragging on the bottom, out of a plastic container of tree fertilizer, and tied it on with a new piece of plastic rope.

I made a cover for the foot valve out of an old plastic toilet brush holder, which was just the right length and shape.  That will help filter some of the mud out. 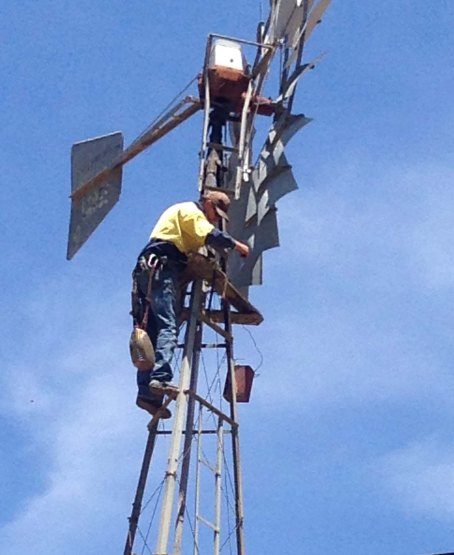 Cliff thought the problem had been caused by the taps on the two pipes above the windmill.  Even when it’s tied down and mostly stopped, a rogue breeze can turn the sail and will break the pump if there’s nowhere for the water it lifts to go.  Cliff pulled apart the mechanism and replaced the piece that holds the “buckets” which are actually rubber rings that push the water up the tube into the pipe.  I remember watching them being replaced years ago with the little strips of leather that fitted the old mechanism.  Hard to believe they could do such a heavy job.  The new one is supposed to be easy to adjust, needing just a slight twitch of the bolt whenever a bit of water starts to leak out the top as the buckets begin to wear. 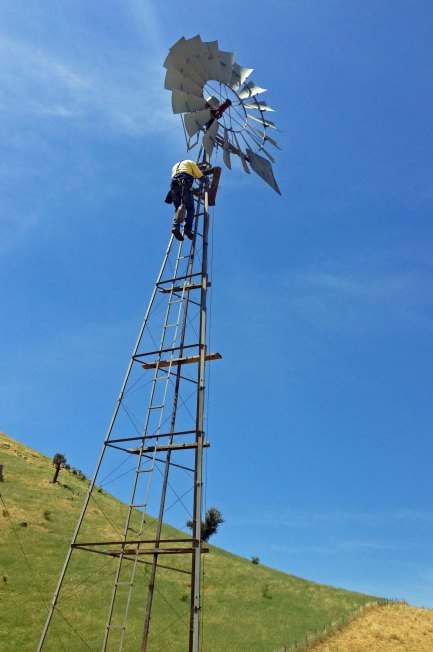 Cliff climbed up the top and oiled the mechanism.  It made me nervous to watch, not because the height is so great, but because the platform he was standing on was made of rotten, flimsy timber.  Replacing that is a job for another day – and for somebody with a head for heights.

Then we filled the suction pipe with water by ordinary bucket from the creek.  Each time Cliff said “Just one more” it turned out to be at least two or three.  Finally the new windmill buckets began to swell up and push the water.

The grandest moment was when the tail was untied and the whole head spun around into the wind, initially clattering, then just building up speed and whooshing along.  It felt like that wonderful moment where a sailing boat catches the wind and starts forward across the water.

Instead, the water started up the pipe, lurching and splashing its way to the top of the ridge and into the recently repaired stock water tank.  The tank still needs to be reconnected to the troughs, but that’s also a job for another day.

Having finished the big old windmill on Esdale, we went over to Adnamira to repair the little windmill that sends water to the homestead garden.  That turned out to need a new suction line which Richard, the tenant, helped set up.  By then the day was hot and it was a pleasure to be splashed even by slightly muddy dam water as we filled the suction line.

The little windmill mechanism (made in the 1980s) doesn’t have the elegant simplicity of the older one, from the 1940s or 50s.  But with a new suction pipe it works like a champion, sending a continuous stream up to the garden tank.

Now the only issue is whether the dam will have enough water to keep the homestead garden green as well as give drinking water for the sheep and cattle in the summer.  It was dug out deeper two years ago, and is filled by a spring, but we’ll have to see how it goes. 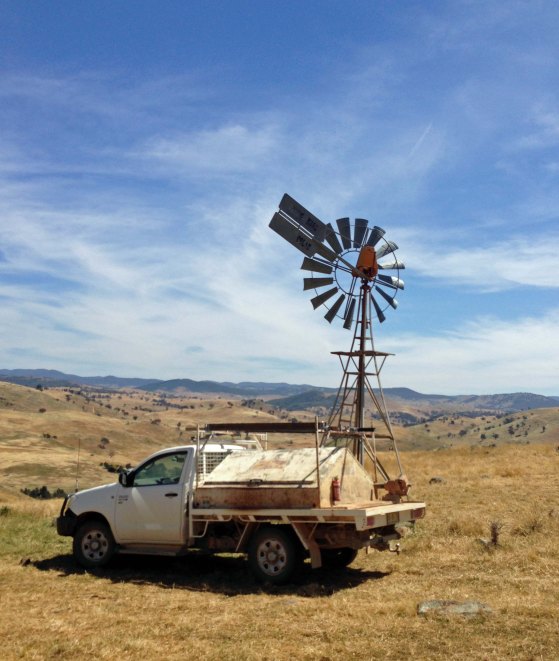