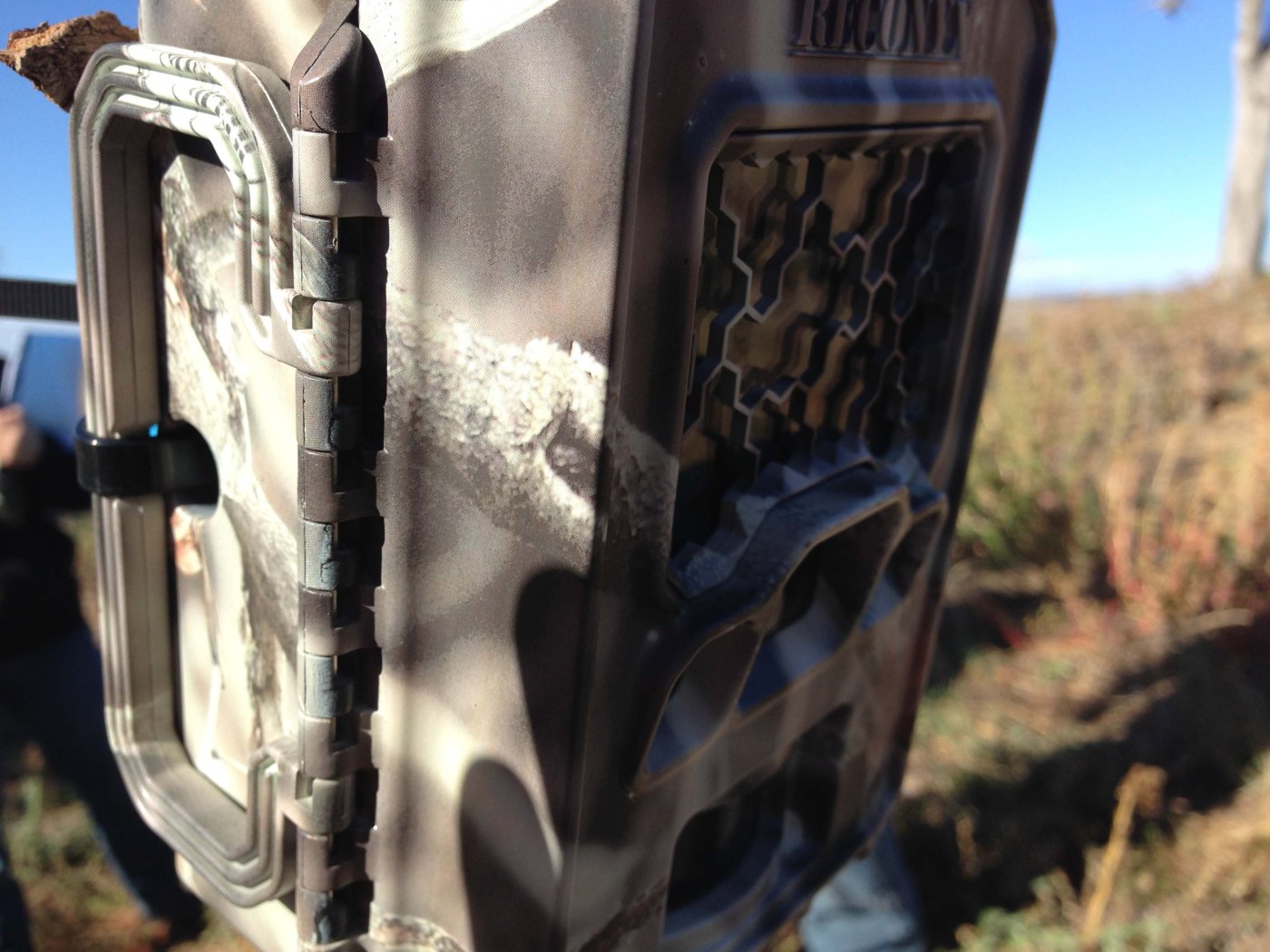 The spy camera team arrived yesterday, armed with a big blue plastic crate full of gadgets, plus a couple of star pickets and a mallet.

I had hoped for the possibility of spotting sugar gliders (Petaurus breviceps).  I’d like to know if we have them or not.  A single sugar glider can eat hundreds of insects a day, such as Christmas beetles which are a significant pest on our trees. Also gliders are really cute.

Wildlife Queensland and iNaturalist.org have pretty good site about them, including a recording of their call, which sounds like a chihuahua barking.   I thought gliders were on the list that Conrad Hoskin and Megan Higgie made of the wildlife they saw at Esdale in 2007-08, but when I double-checked it wasn’t there, so I’m not sure why I thought we would have them in our rather sparse river corridor.

After some debate, and scouting along the river bank, the team realized they couldn’t set up the movement-sensing camera pointing at the branches anyway, because the wind was blowing them so enthusiastically that the result would be a series of photographs of twigs in the wind. So the camera was set up pointing towards the base of a dead tree (no leaves to wave).

On the ground the team put out a tiny bait station loaded with peanut butter, oats and another magic ingredient, I think fish sauce.  Honey was added for possible gliders, but if too many unwanted ants are attracted, that will be removed. 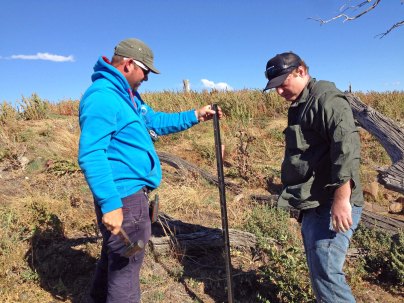 The next camera was placed near a log on the top of the Box Gum woodland ridge, where we planted trees last winter. The wind was so fierce you could almost lean back on it, except it was fickle enough that you’d fall down the hill.  The young trees were mostly doing well, but the surrounding weeds were even better.  Jessie and I worked our way through a couple of months ago removing Bathurst Burr (xanthium), but I can’t remove the rest of the weeds without leaving the ground completely bare.  The top of any hill is where the sheep like to camp, and the grass tends to get worn away and over-fertilized.   In a few years I’ll start seeing if we can get some succession to native species going.

The kangaroos had also made snug weed-free sunning spots behind windbreaks like the the fallen logs.  Little do they know their posteriors are going to be recorded for posterity. 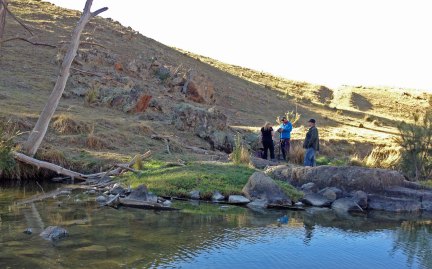 The third camera was put down by the Mullion Creek close to the water.   And close to a wombat hole.

While the cameras were being set up, Lesley Peden was recording vegetation nearby, including an unknown plant that smelled similar to oregano crossed with mint, but tasted much stronger.  Pleagh.

The following day the spy team from Hannah Selmes’ class at Canberra Institute of Technology came back and checked for passers-by.  Camera 2 was investigated by a curious joey.

Camera 3 had a waddle-by from a wombat in the hours of darkness.

No sugar gliders at camera one, but I live in hope.

We have two more weeks of surveillance before the cameras are removed.  The secret life of our neighbours will be secret no more.  Thanks guys.

One thought on “SPYING ON THE WOMBATS”