When trees attack they often do so without warning.

A few months ago, a massive old eucalypt (I thought possibly a Blakely’s red gum, but my identification skills are poor – or maybe a very large Red Box (eucalyptus polyanthemos )  in the crop paddock near the house suddenly turned into a crushing giant squid-shaped thing, demolishing fences and flattening my hopes of helping it live into another century. 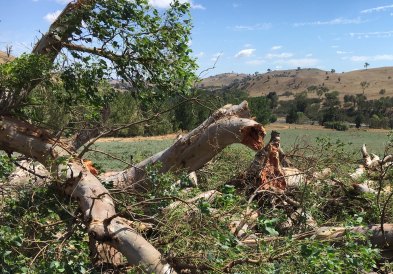 Unluckily, it was in the path of a wind-storm, or a Willy Willy, a giant version of those dust devils you see swirling about in newly ploughed fields.   You could see the line of this twister down the hill from near 2016’s Esdale windbreak, where it took down two dead tree trunks, then the big Blakely’s in its little compound, surrounded by young trees and shrubs planted in 2015,  then invisibly across the crop paddock to the trees over the trough in the Old Orchard, where it ripped off branches,  then straight at the old poplar by my new house entry gate, demolishing the side of the grid and smashing one of my little winged lion statues from Bali into tiny pieces of grey volcanic stone. 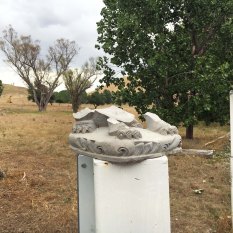 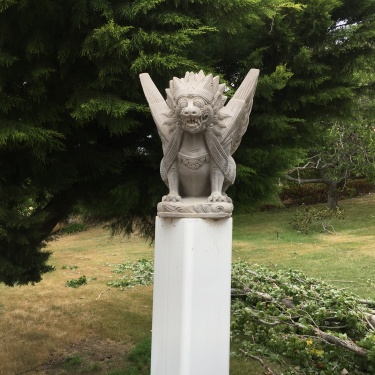 From there the storm  crossed the river to Adnamira and blew things about enough to make Richard Scanes comment “How about that wind storm?”.

I was very sorry to see my statue smashed, and the hard work that went into connecting up the automatic gate wasted, but the death of the big old live tree was really upsetting.

I thought perhaps it had been secretly eaten away from the inside by termites, but when we looked at the raw, exposed trunk it was obvious the wind had simply wrenched it off its base. 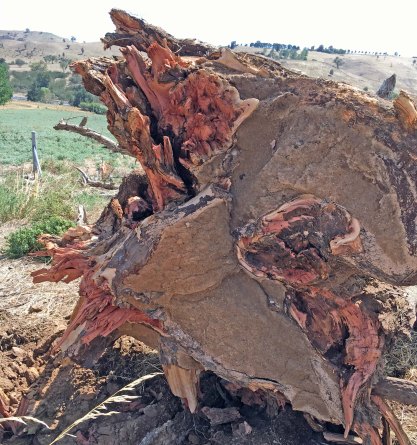 While Craig, Fabian and Andrew Leonard (mainly Andrew Leonard) sawed off branches and resurrected the fence, I stumbled around through the mess looking for the seedlings we put in.   Thanks to the lurid pink covers we found and straightened up all but one, which was firmly embedded under the main trunk. 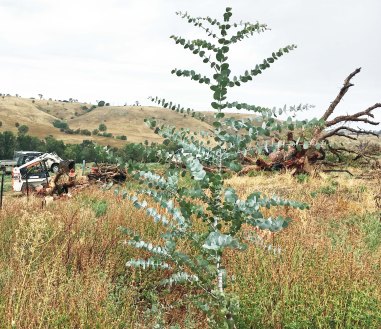 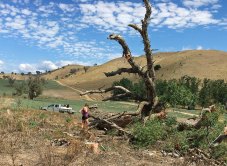 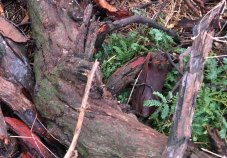 At least these little ones have had an eighteen months start on replacing their ancient neighbour.  I’ll plant some more where the canopy used to be.  It’s nevertheless a huge loss that we no longer have that tree, one that was probably here before Europeans arrived in Australia.  It’ll be decades before any of the new starters have anything like its spread.

At least, since the timber is good, we’ll have a memento of the giant.  Sometime in the next month or so we plant to convert part the main trunk into slabs that we can use for benches and tables.   At a metre thick and very straight, it’s beautiful timber.

I would still rather have our old giant.

8 thoughts on “DEATH OF A GIANT”