Having a river in your backyard is a lovely idea, not always so pleasant in reality, as fences and dead animals go swirling past in a flood, or when you find out that a city upstream is putting something in the water that shouldn’t be there.

Waterwatch has been a great way to find out what actually is swimming or floating under the river’s surface.   Previously we could only guess, but now I know the phosphate, nitrate and dissolved oxygen levels, turbidity, electrical conductivity and ph.

During the first year I was collecting data it rained a lot, the river levels were high and the readings were very clean.  Since last year however, the river has been mostly low, and the nitrate levels are generally off the charts high.

I talked to Waterwatch and sent emails to the New South Wales Environment Protection Authority.   The problem is that our section of the Murrumbidgee is downstream from the city of Canberra, including the Molonglo river that makes up Lake Burley Griffin.   That means not just storm water and dog poo, but water processed through the Lower Molonglo Water Quality Control Centre.

It’s true that in some ways the river is cleaner than it was when we were kids learning to swim among the rafts of green algae.  Clumps of algae were ideal weapons for flinging at other kids, but also a sign that the river had far too many nutrients flowing in.  I remember it as mostly brown, rarely clear.  We had our own turbidity tests, where you put your hand down into the water.  It was usually invisible before the elbow.

The ACT government claims that these days “the water that is discharged into the Molonglo River has minimal impact on the environment and downstream users”.  Nevertheless, we have high nitrate levels, and Waterwatch records show that they appear right at the outflow from Canberra’s water treatment plant.   Since we are high up in the Murray-Darling river system, and many towns downstream get to drink our water, I think this is not good enough.

High nitrate levels, besides turning human babies blue if they drink the water, is toxic in a variety of ways to fish and the other creatures that live in rivers, as well as to young lambs on the banks.   Waterwatch gives 1-3 mg/L as acceptable.  Our monthly readings have not been below 4 since early last year, except for a brief moment in the spring.  Many readings have been over 10, and some over 40 (ten times the “very high” level). 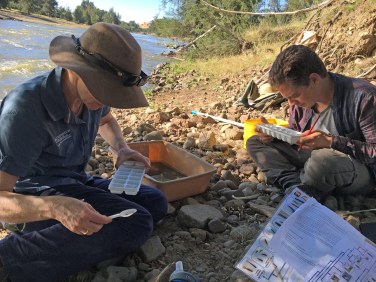 Meanwhile, Bruno from Waterwatch has done two lots of water bug testing, one in the spring and again in the autumn.  The spring testing session had high water, and many small creatures, mostly mayflies, tiny freshwater mussels, some grisly bloodworms.  “The adults get washed downstream in a big flow, so you see a lot of new young ones just starting to repopulate” Bruno explained.

The autumn testing was quite different – much less water for a start.  There were however still 8 different enough types of creatures found, which rates our river’s condition as just one step into “good” from “fair”.

It’s a joy to see the tiny animals that make our river their home.   Counting the tails on mayflies and watching to see which ones use their gills to get around is facinating.

My favourite, however is still the very cute planarian, pictured here much, much larger than its 2mm life size.

One thought on “SOMETHING IN THE WATER”