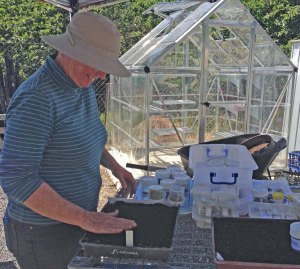 Seeds are such hopeful things.

The propagation days have started for the season at Murrumbateman Landcare.  I usually go on the Thursday evenings, but this time I went on a Wednesday morning.

The seeds all look so enticing in their carefully marked plastic jars.  I love the fact that there are neatly printed label for every possible thing we might sow.  For my vegetable seedlings at home I’ve finally invested in some write-on plastic tags which are really helpful. 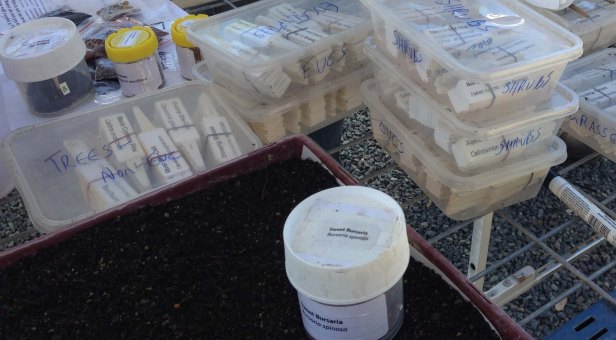 Lisa Borella and the other key people at the Landcare nursery have great expertise about how things need to be planted and what’s good to grow. Lisa gave us a free hand on Wednesday to try something that caught our fancy. 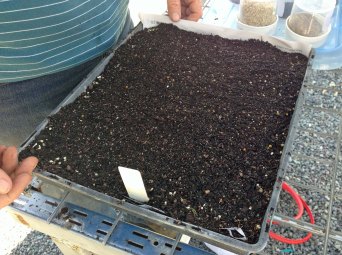 I have a long list of things I’ll probably need for next year.  It’s hard to tell, exactly, because some of it depends on getting the grants I’ve applied for.  I definitely need a range of prickly shrubs and I want to try some understorey plants both in the garden and around the dam I want to fence.

I chose Prickly Bursaria (bursaria spinosa) as my first tray, because last year we ran out of them.  They’re great for surviving fence breakdowns and also keeping small birds and animals protected from cats.   Apparently their sap could also be used as a type of sunscreen. We have quite a bit growing naturally on the south side of the ridge near our Box-Gum woodland reserve and at some stage I plan to try to collect seed from those.

My second tray was Hoary Sunray (leucochrysum albicans) because Craig has been nagging me for everlasting daisy type plants.  They’re a perennial herb with a lovely flower that looks like a fried egg.   They live for a long time, but die down in the winter and reshoot each spring.  They’re both pretty and a threatened species.    Lisa said they’d had little success with growing them last year for some reason.  The seeds might just have blown away as they’re thistledown floaty type things that were rather hard to manage.  I experimented by poking some further into the native potting mix, and scattering some vermiculite on the top to pin them in place.

Flowers of course are like the furry big-eyed animals for conservation – attractive, inoffensive and desirable, so my third tray was a flower too.  The Blue Devil (eryngium ovinum) is a relative of flax-flowers and carrots, but with spiky flowers and foliage.  I’ll have to mark clearly where I plant them, because the young plant looks suspiciously like the nasty sharp saffron thistle (carthamus lanatus) and it might get removed by my own over-enthusiastic weeding. 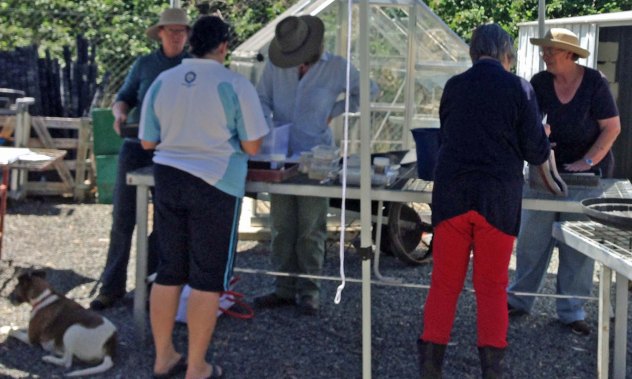 There’s plenty more to do.   It’s great there’s such a wonderful group who get together to do it.   Hopefully, there’ll soon be more than a plastic tag to show what’s in each tray in the greenhouse.