For the third time in three years, many of our trees are looking like ghosts of their former selves.

The immediate, obvious, culprit is the Christmas Beetle (an anoplagnathus species of scarab), a bit of seasonal joy in a shiny suit.  If the weather’s right, it digs its way up from underground in November or December, munches its way to February, then dies.

Their larvae are called “curly grubs” around here and can be found pretty much wherever I’ve tried digging – from high up on hillsides to the sandy soil along the river, under the casuarinas.  They don’t seem to lay their eggs where they feed, necessarily.  Beetle bodies lie thickly under our eucalyptus nicholii peppermint gums that they don’t eat at all.

I hoped that meant that peppermint gums poison them, but I think they just like the shade.  The shade that they remove elsewhere by eating the leaves of the Blakeley’s and Yellow Box gums. 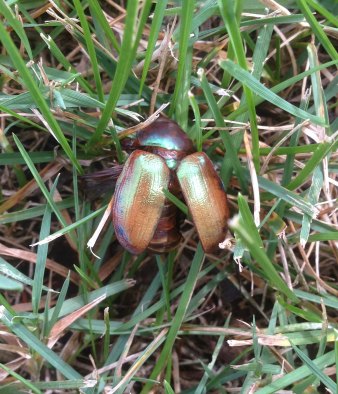 Last year when we drove to Melbourne from Canberra and back, it seemed as if every tree for hundreds of kilometres was destroyed.  This year, in the two weeks I was away in Melbourne, many of our most vulnerable trees have been defoliated.

CSIRO no longer researches Christmas Beetles as I guess they’ve found out all they want to know.  Their information sheet was not as helpful as one put out by New South Wales DPI which actually details everything I wanted to know about Christmas beetle life-cycles. Also,  things I didn’t want to know, like how a beetle larva looks when it’s been colonized by a fungus.  Ergh.

We mainly see them when they start to bash themselves against lights at night.  In the daytime they buzz around the treetops rather like the hummingbirds in California.  Or the hummingbirds fly like beetles.

I’ve been puzzled that very few things seem to eat the adult Christmas beetles.  Their carcases lie around freely on the ground after they’ve died and, presumably, deposited their 40 or so eggs in the ground.

A number of animals will eat the larvae, though.  According to a good set of guidelines from the South Australia Department of Environment and Heritage,  magpies and straw-necked ibis will dig for them with their beaks.  There are also parasitic wasps that will kill them.

The way to encourage these wasps is to have understorey native plants that allow them to feed year round.  The  New South Wales DPI document is nice and specific on this

Steps can be taken to encourage insectivorous birds and parasitic insects, particularly the wasps.  You should provide suitable nesting and roosting sites for the birds and keep small fenced areas of nectar- bearing native plants (including other eucalypts, tea-trees, rough-barked apple (angophora floribunda) and blackthorn (bursaria spinosa)) near or in pastures as sources of food for the insects.  Keep a range of plant species in these areas at all times. Keep grazing livestock out.

I mentioned our Christmas Beetle problem to some locals on Tuesday, and they looked surprised.  “We’ve only had lerps” they said.  “You can tell when a gum tree has lerps because it goes pink.”

I’ve been staring at the trees since, trying to pick which ones look more pink than others.   They mainly look extremely bare.   Possibly some have a reddish tinge.  It’s hard to check the leaves on really big trees, because they’re so high.  I found some along the Wee Jasper Road that looked a bit pink and were low enough to reach.

But when I looked at the leaves themselves, they looked pretty characteristic of Christmas Beetle damage – leaves torn and ripped by their claws as they eat.  The reddish tinge I was seeing comes from the leaf stems and twigs.

It turns out, anyway, that the long term cure for lerps (created by psyllid insects for their larvae) is to encourage small birds and insects to control them, through a better understorey. Does that sound familiar?

And it can’t just be any old understorey.   Northern New South Wales has had problems in forests where the understorey is dense, but made up mostly of invasive lantana that doesn’t feed other native birds.  Bell miners are able to take over and drive off the smaller lerp-eating birds.  Then they farm the lerps for themselves, leading to massive forest dieback.   With the right plants, and a lot of it, it might just be possible to get back some sort of balance.

So the insects stole the canopy, because there wasn’t enough understorey to protect the predators and parasites.

But who stole the understorey?

In order to make a living from the land, by farming sheep, everything that wasn’t obviously necessary for sheep was removed.  That meant tea-trees (pulled out by a chain and a tractor) or bursaria (cut off and painted with 2-4-D poison).  The sheep did the rest.  And the stock continue to stress the remaining trees by standing under them, desperate for shade and shelter, but leaving the ground hard, bare and overfertilized.

The amazing thing is that in a few weeks, most of the damaged trees will put out new leaves and the big canopies will return.   Some are already beginning to leaf up again.  For a few, however,  this year will be one stress too many.

If we’re lucky, our revegetation programs will be in time to help the isolated trees that make it through.

9 thoughts on “WHO STOLE THE CANOPY?”