It’s the time of year to see reptiles out and about on the roads again. 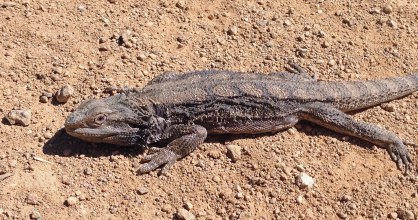 Bearded dragons (pogona barbata) do threatening push-ups as they try to frighten off approaching cars.  Or they lie as flat as possible like this one is doing, before scuttling quickly away.

Unfortunately, our Jack Russell terriers aren’t deterred by the blue tongue, and have killed three of them in recent years.  That’s a tragedy when they’re such harmless creatures.  I suppose the slugs might feel differently but I’m not asking them.

Craig found a legless lizard crossing the verandah last week.  It’s a delma inornata, and matches one of the tails (which are much longer than their body) that we found when weeding in the Box-Gum woodland area last year.   The faint pinkish tinge on the tail made us hope it might be a much rarer pink-tailed worm lizard (aprasia parapulchella) but it wasn’t nearly pink enough.

Delmas are often unfortunately mistaken for snakes and killed as a threat.  The clues are really in their small size.  This one had also lost its tail, which is more of a lizard than a snake thing.  If you’re willing to go close you can see the ear-holes just behind the head, and underneath the body has a slightly hourglass shape that shows where its ancestors once had legs but they have been evolved away.

A much more showy reptile neighbour is the Eastern Water Dragon (Itellagama lesueurii) that appears regularly at the bridge on the Mullion Creek we call “Lizard Crossing”.   This one appears to be a young male with some breeding colours showing (green rather than the winter grey). 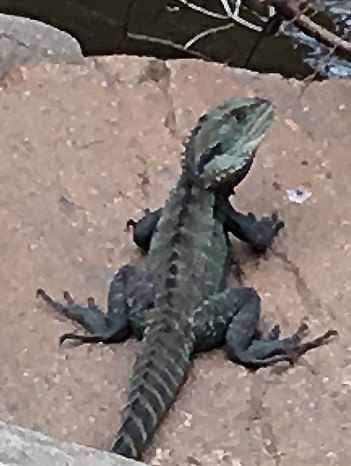 Dragons can move fast, and I rarely get close enough to photograph them.  As a child I was always convinced that they were tiger snakes (which we don’t have locally) when I saw the striped tails disappearing into the water. 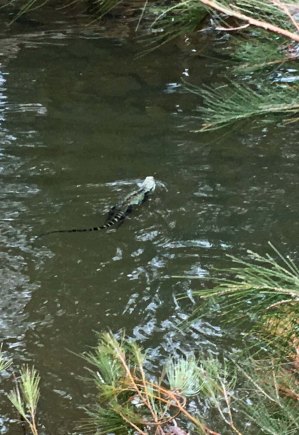 Yesterday, Matthew Kent and I saw a smaller water dragon without the green colouring while we were testing the creek for Waterwatch.  (By the water was the best place to be on such a hot day. ) 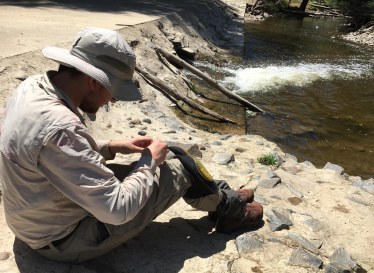 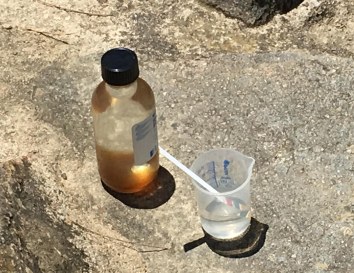 Possibly it was a female water dragon, or maybe a juvenile.   When it decided we were a threat it leapt into the water surprisingly awkwardly, belly-flopping with all four feet splayed out “Like a corgi” commented Matt.

Matt also spotted a large yabby (cherax destructor) claw near where we were testing and thought the main yabby might have been eaten by a duck, but apparently water dragons also eat them.

For humans, though, it’s nice to see our harmless lizard neighbours out and about and I hope we don’t lose too many more to passing cars.